I am a physician specializing in psychiatry, but my approach since way back in 1975 has differed from that of most of my colleagues. Rather than make medication my primary treatment modality, I have been using a Complementary & Alternative Medicine (“CAM”) approach, which looks first to the use of nutrients to treat not only psychiatric problems (such as ADHD and mood, anxiety, and autistic spectrum disorders), but also certain neurological problems (such as seizures and migraines).

Gravitating toward a CAM approach was natural for me. Biochemistry describes a complex and endlessly elegant system that I have always enjoyed learning about. Beyond that, it’s a fact that mental and emotional problems are often caused by biochemical and nutritional imbalances.

This idea of putting nutritional approaches before medication shouldn’t surprise anyone; virtually everything in the brain is made with the help of a) nutrients, along with b) enzymes, and c) co-factors. Enzymes are proteins that speed up (catalyze) an otherwise-slow reaction that transforms nutrients into such finished products as neurotransmitters, myelin sheaths, etc. Defects in these finished products can seriously impair cognitive functioning. Co-catalysts or co-factors, such as a B vitamin and/or a mineral, are often required to make the enzymes work. Without these co-factors, the brain’s reactions can stall like a car engine with faulty spark plugs.

Given the magnitude and complexity of all that, it has always seemed to me only common sense to check out the functioning of the body before assuming anything psychopathological is going on. And my “common sense” turned out to be correct: Supplements of missing nutrients often produced massive improvements in my patients’ mental and emotional functioning. So I kept doing it.

That’s where I was in March 2012 when a former colleague of mine asked me if I would be willing to treat her husband—my old friend, Dr. T.

Dr. T was in desperate shape. In 2007, at the age of 73, he had been a practicing psychiatrist running a private clinic, authoring articles on regulation of monoamine neurotransmitters, tangoing with his wife, and enjoying his children and grandchildren. Now, just 5 years later, after 3 strokes and two bouts of bronchopneumonia, he was in end-stage dementia and miserable. His scores of the GAF (Generalized Assessment of Functioning, a measure of a person’s ability to perform Activities of Daily Living) had fallen below 5 percent. He was untestable in the Mini Mental Status Exam, knew no one in his family, couldn’t remember his birth country or that he was a doctor, and was wracked by coughing and excruciating peri-anal excoriations brought on by antibiotic-induced diarrhea. Hospice workers had recommended his tube feedings be stopped (in other words, “let him go”).

But there were flashes of awareness. For example, when I asked him what his name was, he replied, ”If I knew that, I could get out.” I said to Mrs. T, “I sense there’s someone in there, and if we can connect the drive train to the motor, I think we can get somewhere.” 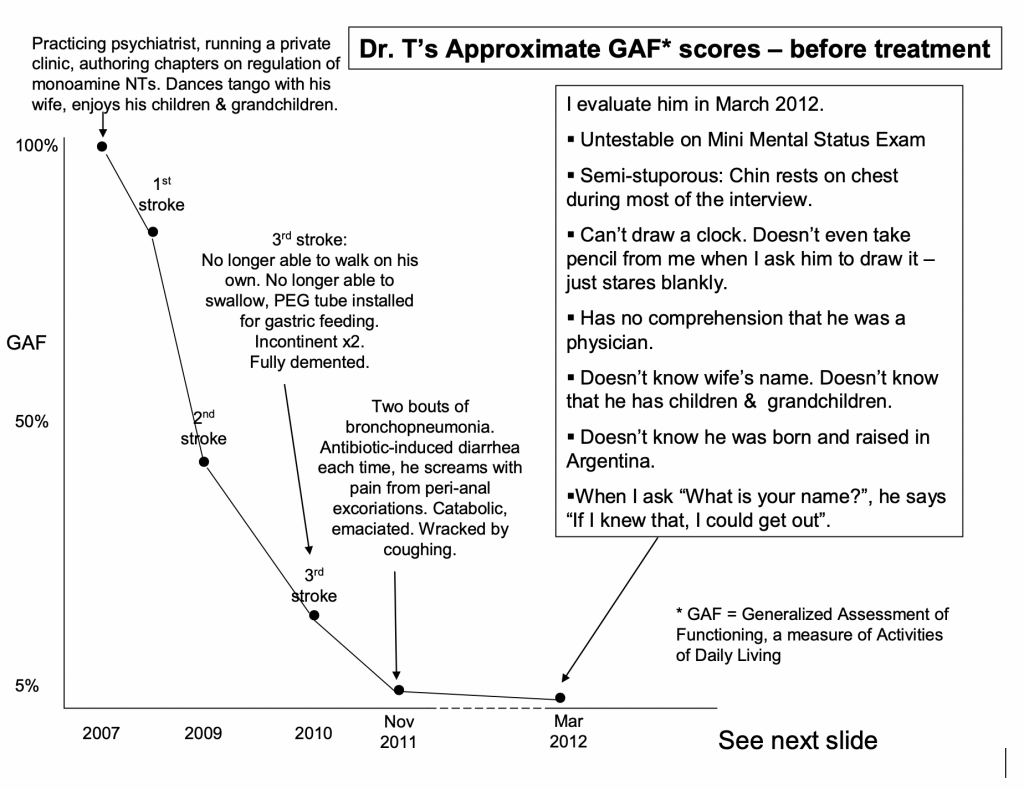 I then began a phased treatment process that, for a number of reasons, began with coconut oil. There is mounting evidence that, in various types of dementia, some regions of the brain don’t respond properly to insulin. When, as a result, the neurons fail to absorb glucose, their primary fuel, they starve and die and the brain shrinks. Fortunately, a neuron is a hybrid engine in that it can use an alternate fuel—ketone bodies. Ketone bodies are produced by our liver when we eat coconut oil, and these ketone bodies then nourish the damaged but still living neurons and restore them to normal metabolic functioning.

Coconut oil is the safest of the substances I administered to Dr. T and many, many people have used it to good effect. Even so, there are some important caveats to keep in mind when using coconut oil:

In addition to coconut oil, I used other nutrients, nutraceuticals, and herbs, including B vitamins, amino acids, minerals, and herbal extracts standardized to specific percentages of the main active ingredients. 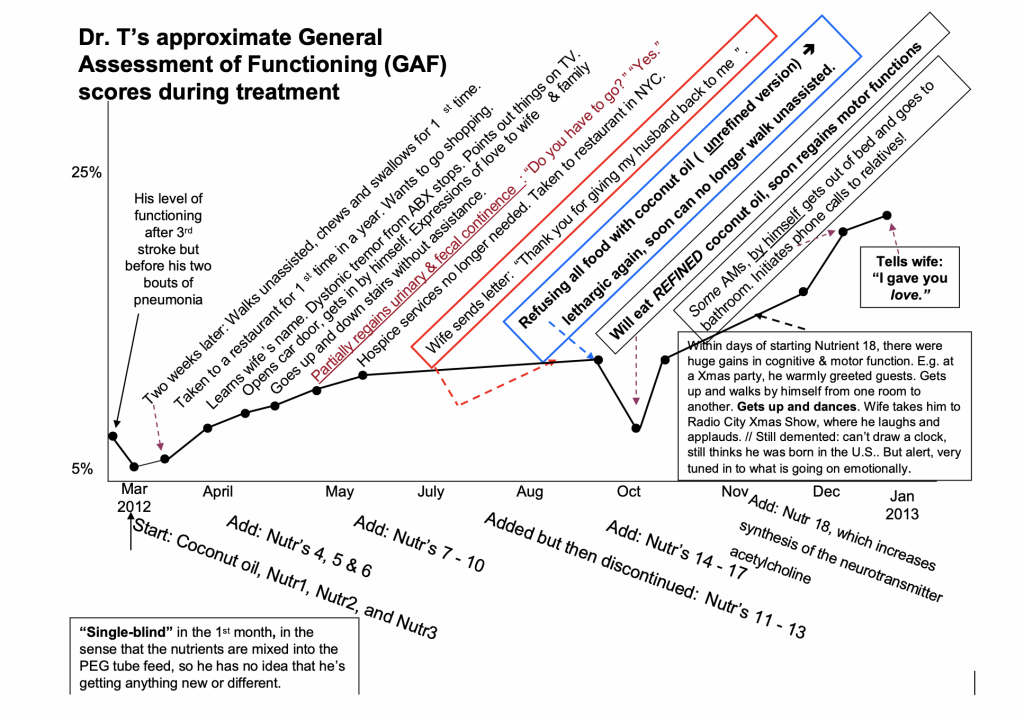 Let me pause here a moment to comment on a question I’ve wrestled with: “Do I name the nutrients and quantities I used for Dr. T or not?  What are the risks?” If I name them, I run the risk of people getting into trouble by following a strategy designed for someone else and based on a sophisticated understanding of the interactions and risks. If I withhold the names of the nutrients, I risk having my readers think I’m arbitrarily withholding secrets (perhaps for financial reasons) that might save the life of someone they care about.

I consider the article valuable and radical even without the names of the specific nutrients, because it proves beyond a shadow of a doubt that it’s possible to completely turn around even extreme debility in a patient who has dementia, and to do so using a treatment strategy heavily weighted toward the nutritional, perhaps using only few medications aimed at specific results.

Because I would not want a bad experience based on incomplete understanding to take anything away from that value, I chose the conservative route and have withheld most of the specifics from the printed article.

Let me explain more about why I made that choice:

To find such a health care professional, start by contacting the American Association of Integrative Medicine (www.aaim.com) and check the Directory section of the website. You can also contact the American Psychiatric Association Caucus on Integrative Medicine; (www.intpsychiatry.com) If you find someone and have them call me, I will gladly share the list of nutrients and quantities with them. I can be reached at rcarltonmd@gmail.com.

Compared with what his GAF scores would have been before his strokes (100%), they are at about 25%, up from only about 5% just prior to initiating treatment. He is still considered demented, given he can’t yet draw a clock or remember that he was born in Argentina. But he is alert and registering subtle gains most days. And there are high points: For example, around Christmas time, he warmly greeted guests, walked around the house, and even got up and danced. Later, when his wife’s birthday came around, the aide teased him by twice asking, “What did you get your wife for her birthday?” When the aide left the room, Mrs. T said to him “Don’t worry if you didn’t get me something for my birthday, you’ve given me lots of things over the years.”  He thought about it, and then asked, “I gave you love?” Her heart melted and she said “Yes.”

Despite the supplements I used being natural, it is possible for patients to develop side effects including rashes or changes in blood pressure. For that reason, it is important to be under the care of a physician when using supplements to treat memory loss.

Dr. Richard Carlton is an integrative psychiatrist and pioneer in the rational use of nutrition-based treatment approaches when treating “mental” issues (such as depression, anxiety, ADHD), or “physical” problems (such as cognitive impairment or dementia, migraines, PMS, and IBS). He practices in Port Washington, NY.