Home | News & Resources | “The Lights Are Coming Back On”

“The Lights Are Coming Back On”

There is very good news about what coconut oil can do to slow or reverse the progression of Alzheimer’s in many people. One of those people is Steve Newport, husband of Dr. Mary Newport, a physician who runs the neonatology ward at a Tampa FL hospital. The entire story is related in detail by Dr. Newport in her book Alzheimer’s Disease: What If There Was a Cure? The Story of Ketones by Mary T. Newport, MD (Copyright © 2011; Published by Basic Health Publications, October 7, 2011). We also recommend you visit her website, www.coconutketones.com.

Steve Newport was diagnosed with severe Alzheimer’s in 2007. When asked to draw the face of a clock, “He drew circles and several numbers in a very random pattern.” Galvanized by the diagnosis, she began learning everything she could about her husband’s disease. “It appears to be a type of diabetes of the brain, and it’s a process that starts happening at least 10 or 20 years before you start having symptoms. It’s very similar to type 1 or type 2 diabetes in that you develop a problem with insulin.” In this case, insulin problems prevent brain cells from accepting glucose, their primary fuel. Without it, they eventually die. But there is an alternative fuel: ketones, which cells easily accept. Ketones are metabolized in the liver after a person eats medium-chain triglycerides (MCTs) like those found in coconut oil. Coconut oil (raw, nonhydrogenated, without transfats, or in a refined form known as MCT Oil) is the most efficient way to get MCTs into the body.

Just 2 weeks after Dr. Newport added coconut oil to the diet of her husband, Steve demonstrated stunning improvement on the clock test, and in just 3 weeks after that he not only continued to improve the clock 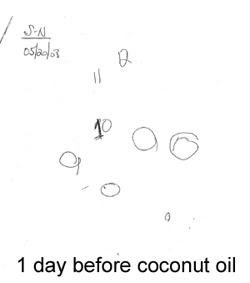 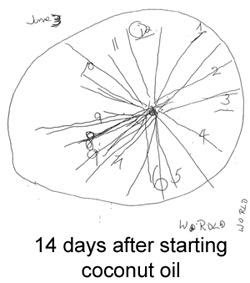 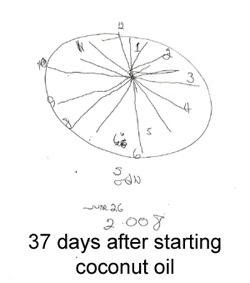 drawing but he could run again. At four weeks he said, “I think the lights are coming back on.” And after two or three months, he was able to read, pop out of bed in the morning with energy, talkative and joking, and make his own breakfast.

The Science behind Ketones