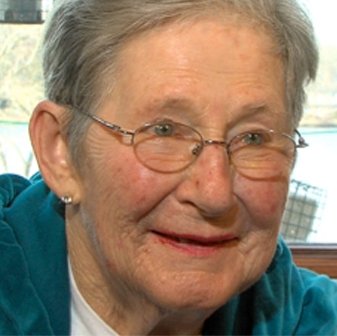 June 22, 2010: After an ischemic stroke, Anne, 86, is placed into hospice care. Her medical team tells the family, “Medically, there is nothing more we can do.” An MRI shows brain shrinkage. Anne’s medical team diagnoses “terminal vascular dementia” and gives her less than 2 weeks to live.

Anne can’t move any part of her body but her eyes and mouth, and she can turn her head 45 degrees. She knows no one. She sleeps 18+ hours per day. Anne’s husband, Paul, decides she will spend her last days in the familiar comfort of her own home, and he and the family convert the dining room into a hospital room. Hospice supplies a hospital bed and hospital table, an oxygen generator, and a Hoyer lift to move her, and a 24/7 caregiver is brought in.

The thought is to keep her comfortable and be there by her side. Anne can only take in nutrition by sipping thick liquids through a straw. Her son, a nutritional microbiologist, decides to try feeding his mother healthy foods in the form of fruits, vegetables, nuts, seeds, and other nutrient-dense foods. Gluten, sugar, and dairy products are eliminated from her diet, and she receives adequate hydration.

Change is slow, but Anne starts to improve, imperceptibly at first and then more each day. Three months later, it is obvious Anne is not dying. She stays awake most of the day. Although her aphasia is still significant, she is communicating her needs clearly enough to begin participating in her own care. She knows who and where she is and also recognizes her husband and family again. It is no longer appropriate for her to remain in hospice care since she is obviously out of danger and recovering steadily.

July 2, 2011: Fast forward nine months. Anne is released from St. Francis Hospital’s Home Care since she is no longer officially homebound; she gets out daily (weather permitting) for fresh air with her husband Paul. At 89, he prides himself on pushing her wheelchair around the lake where they have lived for the past 49 years, as often as three times a day.

The only factor that changed in Anne’s care after her return to her home with hospice care was nutrition. Feeding her blended raw fruits and vegetables, thickened fruit and vegetable juices with lots of prunes, and hydration ensured her system could evacuate. Vegetables included celery and parsley for cleansing, carrots/beets for sweetness, and cucumbers and leafy greens for alkalinity. Fruits included pineapple and papaya for digestion, bananas for some sweetness, and fresh or frozen berries or any other fresh produce that could be added to her VitaMix™ blender meals and smoothies to make them tasty.

Thanksgiving Day 2011: Anne and Paul sit at the dining table (where Anne’s hospital bed used to be) and blow out 87 candles to celebrate her birthday. She now sleeps upstairs with Paul in their master bedroom. Anne and Paul go to church weekly again, and Anne’s memory continues to improve.

April 2012: Anne and Paul celebrate their 67th Wedding Anniversary. Neither Anne nor Paul experience any body aches or pains, and take no pain medications whatsoever. Anne stands up on her own for the first time without assistance. She wants to walk again on her own and based upon her last 21 months of steady recovery, the bets are she will accomplish this goal before Paul turns 90 in August.

Anne’s memory continues to return, along with her sense of humor, dry wit, and perfect timing. She still drinks fresh juices and smoothies even though she can chew all types of food and swallows water easily. Her vitality, from this fresh fruit/veggie juice lifestyle has kept all her systems working very well and her skin tone is clear and rosy. The number of prescriptions she takes has dropped from eight pre-hospice to just three afterward.

November 4, 2014: Anne quietly passes on with her husband Paul at her side after more than four wonderful years together beyond the medical diagnosis of only two weeks to live in 2010.