Electromagnetic Frequency – How it Affects Our Brain and Our Body 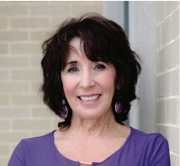 Can you describe Electromagnetic Frequency (EMF)?

The easiest way to describe it is that the human body is a coherent, highly sensitive electrical system called the biofield, described as “the field of energy and information that surrounds and interpenetrates the human body.” We can now see it in imaging. We humans have been designed to live in a world that has native electric frequency, a magnetic and electrical field from the earth and the sun that nurtures us and has kept us thriving. We have evolved with that native field.

Non-native electrical fields include microwave radiation, radio frequencies, and what is emitted from cell phones and towers, routers, “smart” appliances—anything wireless. We refer to these as EMF’s and they are created by man, and are toxic and disruptive frequencies for the human body.

What are some symptoms of EMF exposure?

EMF exposure can cause anxiety and depression, which may be contributing to higher than normal rates in our young adult population. With high levels and repeated, regular exposure, we are seeing an increase of rashes and burns where cellphones are carried, and a rise in brain tumors in both adults and children. It is believed that exposure over time can lead to dementia.

What are some other effects of EMF’s?

Exposure to EMF’s suppresses the production of melatonin at night. Many people have smart TV’s, electric clocks, cellphones and iPads in their bedrooms. Blue light is emitted from these devices, as well as LED light, which is a frequency of midday. Your circadian rhythm will be affected. It’s one of the reasons we are seeing so many sleep issues in both adults and kids. Melatonin supplements cannot adequately compensate for this problem.

EMF’s are also causing dehydration and large amounts of oxidative stress. Dr. Martin Pall, Professor Emeritus of Biochemistry and Basic Medical Sciences at Washington State University, has researched the effects of EMFs on the human body. He describes how the voltigated calcium channels open cell membranes to calcium ions, which leads to dangerous free radicals circulating in the body. Oxidative stress from free radicals causes a host of chronic diseases like cancer, diabetes, cardiovascular disease, autoimmune issues and infertility. It also causes a breakdown of the blood-brain barrier, which is supposed to prevent toxins and pathogens in the circulatory system from entering the brain.

And one other place in the body we are seeing an effect is the gut microbiome, for many of the same reasons. There is an increase in pathogens and a suppression of more beneficial microbes. It can lead to antibiotic resistance. We know that gut health is directly related to brain health. Production of our neurotransmitters is generated out of the microbiome.

Why are EMF’s considered the most dangerous of all toxins?

It is believed by researchers and practitioners in the field that exposure to WiFi frequency and all these electronics exacerbates all other toxic exposures. For example, heavy metals (like those found in “silver” fillings) are a serious toxic exposure. A cellphone can liberate 600 times more amalgam. In effect, we become walking antennas.

What do you see happening with EMF’s in the future?

WiFi and the ability to be connected is increasing. If you are in a forest and have a cell signal, you have exposure. There are cell towers on the Himalayas. Not only are EMF’s everywhere, they are getting stronger as companies move to 5G and launch bigger satellites to provide more powerful signals. Soon, there will be very few places on the planet where there is no exposure. More than 230 scientists from 41 countries have expressed their “serious concerns” regarding the ubiquitous and increasing exposure to EMF generated by electric and wireless devices.

Are children at greater risk of exposure?

From the time a woman becomes pregnant, the child is at risk of EMF exposure. EMF’s can cause DNA damage. The results of multiple studies over the past two decades show that children exposed to high levels of EMF’s in the womb experienced disruptions in brain development and sleep patterns, and increased asthma, among others. You don’t want a baby monitor near the crib, or a device attached to your baby’s clothing.

What can we do to counteract the effects of EMF’s?

Nature is always the place you want to go because you connect with the magnetic field of the earth and have clean air.

Products that help protect against the effects of cellphone radiation use patented technologies, one of which is Molecular Resonance Effect Technology (MRET). MRET helps to neutralize the harmful effects of EMF’s while simultaneously providing support for the body’s cellular functions. Another proprietary technology owned by GIA Wellness, Energy Resonance Technology (ERT), works by strengthening the person’s biofield, thereby helping all the systems of the body to communicate and work properly.

EMF’s may unfortunately become our next major health crisis. I encourage everyone, and especially parents, to learn more about the effects of EMF’s so that children are not overly exposed. We need to be aware of the problem and take steps to protect ourselves because these devices are now a part of our culture.

1 The World Health Organization has classified EMFs as group 2B carcinogens (possibly cancerous) and a 2016 NIH study found an increased occurrence of rare brain tumors (gliomas) and rare heart tumors from exposure to microwave radiation from cell phones. http:// www.sciencedirect.com/science/article/pii/B9780123864543010356