Mercury was first widely introduced as a filling material in the early 1800s. And responsible physicians have been opposing the use of mercury amalgams to fill cavities ever since. The American Society of Dental Surgeons, which preceded the American Dental Association, made its members pledge not to use mercury because of its known neurotoxicity. More recently, government officials, scientists, dentists, consumers, and many others have raised serious concerns about the documented damage done by dental mercury to humans and to the environment at large.

Other countries have taken this information seriously: The governments of Norway, Sweden, and Denmark have banned the use of mercury amalgam fillings in dentistry, France has recommended that alternative mercury-free dental materials be used for pregnant women, and Germany, Finland, Austria, and Canada have worked to reduce the use of dental mercury amalgam fillings for pregnant women, children, and patients with kidney problems.

In the U.S., however, many people are unaware of important issues concerning amalgam fillings, and so we address the following questions to help fill in the blanks.

Is it true that once an amalgam filling is removed it is considered hazardous waste?

Yes. The Environmental Protection Agency, regulating the disposal of hazardous waste materials, requires dentists to take all the amalgam fillings they remove from patients and put them in an in-house separator, which extracts the mercury so it can be safely disposed of as hazardous waste.

Why does my dentist tell me my amalgams are safe, stable, and do not leach?

It is entirely possible your dentist is unaware of the risks, and may resist requests to take mercury-safe precautions in removing amalgams from your teeth. In fact, nearly half of all American dentists are still inserting mercury into people’s teeth. Why? Because dentists are subjected to a barrage of information from the American Dental Association (ADA), dental schools, training programs, literature, and conferences proclaiming that dental amalgam fillings are safe, stable and do not leach mercury. This is simply not true.

Even the ADA’s own literature shows that mercury leaches from amalgam fillings, so much so that eighty percent of the mercury is gone from the filling after 25 years. There is no place for it to go except to migrate into the digestive or respiratory systems. Here is a photograph of an extracted tooth showing a mercury amalgam filling off-gassing mercury vapor. 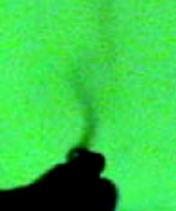 Quackbusters activist Dr. James Laidler, MD posted a comment online disputing this evidence, asserting that it must be water vapor because mercury atoms would be too heavy to rise.

Sharp Again spoke with the scientists involved in the original experiment, and they explained the fallacy behind Laidler’s comment this way: (1) the lamp used to illuminate the gas was a spectrophotometer and set at 254mm to illuminate mercury and mercury only; a 254 mm light can’t “detect” water. (2) The amalgam filling was being heated to temperatures consistent with being in a person’s mouth, including while they drank hot coffee. That would increase the rate of vaporization, and the vapor pressure of mercury doubles for every 10 degree C increase in temperature, and as they do that, gas molecules react not to gravity but to density, moving away from each other and into areas least populated by other mercury molecules. Gravity would have nothing to do with it.

Why do so many organizations point to peer-reviewed literature saying there is NO link between mercury amalgams and Alzheimer’s?

There is a mountain of peer-reviewed literature to prove dental amalgams are hazardous in the extreme. Why? Because every time you chew, grind your teeth, drink a hot beverage, take a breath, or swallow, the fillings leach the mercury into your lungs, your bloodstream, and your digestive system, poisoning your body and adding to your body burden. Such articles support the link between mercury and neurological disease, including Alzheimer’s, which is why silver fillings are banned or restricted in a number of countries.

However, there are studies showing there is no link. There are several reasons for this:

And here’s a question from a reasonable person: If mercury does not cause Alzheimer’s, why people experience relief from their Alzheimer’s symptoms when silver fillings are removed and they detoxify their heavy metals?

Everyone’s body is unique and some people’s bodies are much better at excreting mercury than others.  For example, those having at least one APO-e4 gene are more sensitive to mercury fillings and might experience symptoms, while those with the neuro-protective APO-e22 gene might easily excrete the mercury emanating from amalgam fillings. And there are many other factors at work here. What this suggests is that those who are most susceptible must minimize their mercury levels.

Can my regular dentist remove my amalgam fillings?

If your dentist doesn’t have mercury-safe training already but is open and willing, put them in touch with the International Academy of Oral Medicine and Toxicology (www.iaomt.org) and ask them to get certified – everybody wins that way. If he or she is not willing, we recommend refusing all future mercury fillings and finding a mercury-safe dentist to handle the removals – especially if you already have some symptoms.

(See Shiny Deadly Mercury for a list of symptoms)

Should I have my amalgam fillings replaced?

Most holistic practitioners advise having mercury/silver amalgam fillings removed by a trained mercury-safe dentist. Mercury removal is more than just a dental matter, because how the mercury that’s already lodged in your body gets removed depends on a number of medical factors your dentist isn’t trained in assessing. Savvy dentists may send you to a medical practitioner for some advance preparation, first to clear the liver and kidneys, and then to begin some level of detoxification before beginning to remove your amalgam fillings. In addition, some practitioners suggest taking charcoal orally on the day the amalgams are removed.

What are the protocols for removing amalgam fillings safely?

Safety protocols, such as dental dams, protective clothing, and independent air supplies, are designed to protect both dental workers and patients from inhaling, ingesting, or absorbing mercury through the skin. The International Academy of Oral Medicine and Toxicology (IAOMT) makes these protocols available online. Visit www.iaomt.org for more info.